How To Become A Freemason

Wondering how you can become a Freemason but you don’t know where to start?

The good news is that you’ve come to the right place! 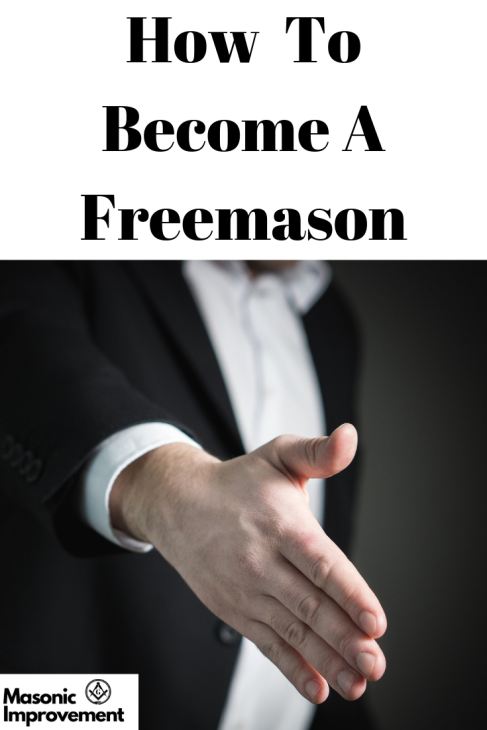 If you’ve followed my content for any length of time then you’ll notice right away that this isn’t like most of my other blog posts. While most of my articles are directed at existing Freemasons, this one will serve as an informative resource for anyone that wants to take that first step but may have reservations or doesn’t know what to do.

First Thing’s First – Before going any further, it’s important to take a few moments to clarify who we are and what we do. There are a LOT of misconceptions about us and joining for the wrong reasons or having unrealistic expectations will benefit nobody.

What Is  A Freemason?

With all of that being said, let’s look at how you actually go about joining:

Pick A Grand Lodge – This is the first and most important step you’ll take towards becoming a Freemason. Most states have two Grand Lodges: Prince Hall and “Mainstream”. This can be confusing as it’s actually pretty complicated, so here’s an example:

I want to be straightforward and honest about one of the most obvious differences between the two Grand Lodges. Prince Hall lodges typically consist mostly of African American men while “mainstream” lodges will have a majority of white men. That’s not to say that (in most cases) white men cannot join  Prince Hall lodges and vice-versa and this difference in demographics is the result of several factors.

Either way, these are the only two ways of becoming a Freemason in Texas.

Each Grand Lodge has its own unique history and culture and it’s highly advised that a potential petitioner does thorough research before choosing a Grand  Lodge. In the same breath, I should also point out that you take great effort to ensure that the Grand Lodge you choose to join is legitimate. There are many fake Grand Lodges that may sound authentic but, in reality, will not make it’s members actual Freemasons and have no recognition from actual Grand Lodges.

Speaking of recognition, which is the ability to visit lodges in other Grand Lodges, some Main Stream Grand  Lodges don’t recognize Prince Hall Grand Lodges in their own state, and vice versa. We don’t have this problem in Texas but if this is important to you then be sure to look into it.

Locate Some Nearby Lodges – Once you decide on a Grand Lodge your next step will be to find the website for said Grand Lodge (if you haven’t already) and look for a directory of lodges you can petition.

For example, the Grand Lodge of Texas has a Lodge Locator that’ll point you in the right direction.

Alternatively, you could simply do a Google search, such as “Masonic Lodge Waco, TX”. This may tell you about local lodges but take care to identify what Grand Lodge they are under.

Either way, what you’ll be looking for are lodges within a certain radius that you’d feel comfortable commuting to on a regular basis. Once you have identified a few lodges, you need to find out their meeting times and a way to get in contact with the Worshipful Master or Secretary. The Grand Lodge website may be helpful in finding this information or you may have to find the website or Facebook page for that lodge.

Once you have an email or phone number for the Worshipful Master or Secretary then you’ll need to reach out to them. Tell them who you are and that you’re interested in joining and you’d like to visit the lodge sometime if possible. This should go without saying, but be polite when speaking with them and patient if you send an email or leave a voicemail and don’t receive a quick reply.

If two or three weeks pass by and you don’t get a response then go an introduce yourself before one of their meetings. Nonmembers aren’t allowed to attend meetings, so don’t expect to be there very long. Still, you can visit and make your intentions known before you have to leave.

Visit the lodge – and repeat this process for each of the lodges that you’re considering joining.

There are two reasons for this and they are very straightforward:

You see, each lodge is unique with its own culture, history, goals, membership, and norms. What you are looking for is a lodge that you are most compatible with and this is why it’s important that you don’t simply petition the closest lodge and hope for the best. It’s just as important that you’re a good fit for that lodge as it is for you to like the lodge.

For this reason, I’d go as far as to recommend that you visit each lodge for several months before ultimately deciding on which lodge you want to petition. Some lodges may give you a petition and try to get the ball rolling during your first meeting, there’s no harm in letting them know that you’re visiting around and will make a decision soon.

“Some lodges may give you a petition and try to get the ball rolling during your first meeting, there’s no harm in letting them know that you’re visiting around and will make a decision soon.”

Turn In Your Petition – Once you decide on a lodge, you’ll need to request a petition for membership if you haven’t been given one already. After you fill that out and turn it in you’ll be assigned an investigation committee during the next stated meeting. The investigation process can be very formal or (unfortunately) very informal depending on the members of the committee and the culture of the lodge itself.

Many people feel intimidated at the thought of being investigated but even the most thorough of investigations are nothing to be concerned about so long as your intentions are valid and you’ve been honest on your petition. If you’ve followed my advice and visited the lodge for a few months then you’ll likely already know the men investigating you, which may make you feel more at ease.

After the investigation committee turns in their report there will be a vote at the next meeting to decide if you’ll be admitted into the fraternity. The petitioner (you) will be informed by a phone call or letter shortly afterward.

Don’t Spoil Your Experience – Not knowing what to expect can be pretty nerve-wracking and it can be very tempting to hop online and try to find out what happens during the degrees. I’ll be honest – the truth is out there, but for every grain of truth on the internet, there is a disproportionate amount of misinformation.

“…the truth is out there, but for every grain of truth on the internet, there is a disproportionate amount of misinformation.”

The degrees, if done correctly, are life-changing but nothing will be done to harm or humiliate a candidate.

What To Expect Next – If the lodge votes to confer the degrees upon you then be aware that most lodges will require candidates to pay degree fees for each degree they receive. This is completely normal and the fees will vary by lodge and Grand Lodge.

Most jurisdictions also require brothers to memorize and recite a series of questions and answers relevant to each degree before they can process. Again, the specifics of this step vary by each lodge (to a lesser extent) and Grand Lodge (to a much greater extent).

Finally, as a Freemason, you can expect to pay annual dues to your lodge. In Texas, you don’t pay dues until you become a Master Mason but be advised that this may vary by Grand Lodge.

In Conclusion – Becoming a Freemason isn’t a small decision to be taken lightly but if you are seeking personal growth by challenging yourself and being surrounded by other men who will push you to become a better version of yourself then it is well worth every step of the process.

I wish you the best of luck in your endeavor!